How did the chanter compensate for this deficiency?

By a periphrastic version of the general text.

I had the honour of giving the inaugural lecture for this term’s Electronic Textual Cultures Lab‘s Brown Bag Lunch Series held on October 4, 2012 at the University of Victoria.

I am in the beginning stages of my project, “Ulysses Versioned: The Fluid Text,” as part of my postdoctoral research with the Modernist Versions Project (MVP). I first encountered James Joyce’s masterpiece (pace Wake scholars) as a graduate student at the University of Tulsa, where I had the opportunity to work as an Editorial Assistant with the James Joyce Quarterly (JJQ). Not only did I get to take an independent study on Ulysses with Sean Latham, the editor of the JJQ, but I also got to work with the vibrant community of Joyce studies. Joyce is one of the few modernist scholars who can support a robust journal industry on his own, and fans of his work extend well beyond the halls of academia.

Bloomsday (June 16th) is celebrated in Tulsa and Paris, Victoria and Sydney. The University of Tulsa celebrates the day with champagne and readings from Ulysses (the event is organized by the best managing editor I’ve ever worked for, Carol Kealiher). As a young man in Ireland, I marked the day in, what was then, a smoky pub in Sligo. The simple fact is, this book, for all of its difficulty, is loved around the world and is a cause for celebration.

I decided to focus on Ulysses for my postdoctoral work with the Modernist Versions Project (MVP) because of my past experience as Project Manager for the Modernist Versions Project (MJP), which has digitized the Little Review and the Egoist–the two magazines that published portions of Joyce’s novel in 1918 and 1919 respectively (Yale University Press will be publishing The Little Review Ulysses by Sean Latham, Mark Gaipa, and Robert Scholes in 2013/14). I am interested in the print life of Ulysses as it began as magazine pieces and moved into the publishing house. That is, I want to explore and chart what D. F. McKenzie Jerome McGann call the “socialization of texts.” I want to ask, what happens to Ulysses in print as it is published in over 50 English editions? (for a great chart on the Ulysses Family Tree, see Stacey Herbert’s work at Genetic Joyce Studies).

The primary mission of the MVP is to “Provide scholars of modernism with digital tools and resources to catalogue and explore textual variants among works that exist in multiple witnesses in an integrated, web-based environment” and “to enable scholars using Digital Humanities methods to generate new critical and interpretive insights on the basis of these collations.”

There is a long history of textual criticism and genetic scholarship on which to base a versioned edition of Ulysses. Hans Walter Gabler’s famous “Synoptic Edition” created a version based on the principles of the German editorial school, and Genetic critics have examined Joyce’s manuscripts and notebooks. But to whom can we turn for an editing methodology in the digital age? Jerome McGann has produced the impressive Rossetti Archive (as well as a suite of theoretical methods with which to examine the social life of texts); yet, it was not until I read John Bryant’s The Fluid Text that I found a methodology to approach versioning in the digital age.

The very nature of writing, the creative process, and shifting intentionality, as well as the powerful social forces that occasion translation, adaptation, and censorship among readers—in short, the facts of revision, publication, and reception—urge us to recognize that the only ‘definitive text’ is a multiplicity of texts, or rather, the fluid text. (2)

What makes the fluid text different from other methodologies of editing? Bryant outlines four key aspects of his approach to editing:

1. Critical Editing: The purpose of a fluid text edition is to showcase revision…such editions manifest the energy or work that individuals and a culture put into the changing of a text from variant to variant and version to version.

2. Comprehensive: Fluid-text analysis of genesis and revision allows us to gain a sharper sense of the energies of literary work as the locus of interaction of individual and society…the idea of of an “edition” must be expanded to include nonauthorial materials as well.

3. Pedagogical: enable readers to discover textual fluidity, analyze potential meanings, and learn among other things the nature of textuality, the the interpenetration of individual intentions and social texts, and the relation of past language events to our present lives

4. Synergy of Book and Screen: Principles outlined above can best be realized, perhaps only realized, through the extraordinary hypertextual features of the electronic medium. (144-45)

Notwithstanding Lewis’s remarks, Ulysses is a prime candidate for this type of fluid text analysis. Corrections have been part of its DNA since its first full publication at Shakespeare & Company. In fact, Ulysses demands to be treated as suspect and in a 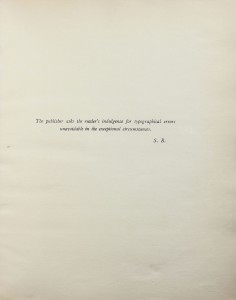 state of flux. In the front matter for the Shakespeare & Company edition, Sylvia Beach writes, “The publisher asks the reader’s indulgence for typographical errors unavoidable in the exceptional circumstances” (image on right). Before we even read the text, we are warned by the publisher that we are reading incomplete material.

Since Ulysses indulges in its textual instability from its copy text to the over 50 English editions published since 1922, I will trace the interconnected relationships of English-language print editions in order to mark up (TEI) and visualize changes in the text–that is, I will chart the social life/practice of Ulysses in print. I’m building on Michael Groden’s work with Joyce’s manuscripts.

In “Ulysses” in Progress, I claimed that “only the combination of first-person narration and parodic exaggeration provides the double, two-eyed vision that is lacking in all the characters except Bloom.” Missing in this claim for “two-eyed vision” is the way in which the copybook scenes and the text itself work in terms of the relationship between the separate visions (or voices) rather than in terms of the ways in which the voices can be brought together. The passage in question, and much of the “Cyclops” copybook, illustrates very well Bakhtin’s claim that novelistic language “is a system of languages that mutually and ideologically interanimate each other. (Groden 13)

Following Groden and Bakhtin, I suggest the multiplicity of printed texts also act as an ideological system that interanimate one another. By putting multiple versions online, we can trace these interanimations–in other words, chart the social life of the printed text.

“Ulysses Versioned: The Fluid Text,” is a collaboration with my colleague Matthew Kochis at the University of Tulsa and any member of the Digital Humanities community who wants to encode a portion or edition of Ulysses.

We will be using the full TEI (Text Encoding Initiative) schema to encode our texts, but we will have two tiers of participation. The Tier 1 TEI schema will consist of a set of elements that participants must use, including:

The Tier 2 schema will be reserved for those who wish to use the full TEI tag set for encoding.

Though Ulysses Versioned focuses on the English print editions, our use of TEI makes our work interoperable with any other TEI-encoded version of the novel. As copyright permits, we will post all available versions to our site.

Ulysses is standard novel for both undergraduate and graduate classrooms. We will be providing images of the original publications as well generated texts (from the TEI) for public use.

Synergy of Book and Screen

Our work will go beyond simply showing page images and text side by side. Tools like Juxta, Versioning Machine, Voyant, and Mandala will allow us to show connections only possible on the screen. If you view the slideshow below, you will see great visualizations produced by Katie Tanigawa on her Nostromo project.

Finally, I would like to add one other tool to the Ulysses Versioned site that I call “Performing Ulysses Versioned. This would be an online form that would allow users to submit the time, place, and edition of a Ulysses reading around the globe. It would be curious to map where (and what) editions are being performed on Bloomsday or what editions are being read in classrooms. One strange example of classroom use is Gabler’s Vintage edition in North America, which is unavailable in Canada yet is a standard text in U.S. universities; Canadians generally read the Penguin edition.

Do check out the slideshow below. Comments are welcome.

In what common study did their mutual reflections merge?

In the fluid version.

← Talk at the ETCL on Thursday, October 4th
Collaboration at Work: Special Collections →