The following text is from an exhibit curated by Dr. J. Matthew Huculak in Special Collections at the University of Victoria. You can view the exhibit during these hours: 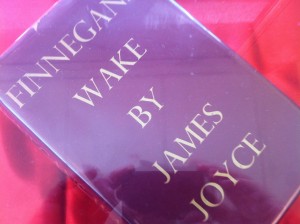 Did you know that Special Collections at the University of Victoria has a rich collection of James Joyce material?

What makes this collection particularly unique is its gathering of facsimile “avant-textes,” which comprise the manuscript material of a given work (not shown), as well as its near-complete compilation of periodical and special-edition versions of Joyce’s work.This exhibit highlights some of Special Collection’s material pertaining to Finnegans Wake (1923-1939). By the time Joyce started writing Finnegans Wake 1923, he was already famous internationally for the “Scandal of Ulysses,” when his magnum opus was banned and declared obscene in the United States and Great Britain.[1]

Joyce was able to capitalize on the attention this scandal garnered, and he became a cause célèbre among literary circles around the English-speaking world, which anticipated his next great work after Ulysses. But how exactly did Joyce publish this “Work in Progress”?

The “little magazine” became the primary vehicle through which avant-garde authors could publish their work, which was often commercially unviable. They are called “little” or “small” magazines since they were opposite to the “large” (in circulation and size) popular magazines. The little magazines became synonymous with “high” art and “difficult” literature, and advertised themselves as being champions of art—not profit. Many of them failed immediately and some lasted only a few years, but their legacy lives on in the work they published: they preserve the “first drafts of modernism” in their fragile pages.In 1924, Ford Madox Ford started his influential little magazine, the transatlantic review, in which he published Joyce’s new writing as “Fragments of a Work in Progress.” Joyce adopted the name as the working title of his book—in fact, the title “Finnegans Wake” would not be used until its final and full publication by Faber and Faber in 1939. 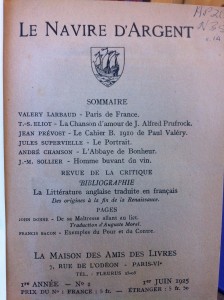 In 1925, Adrienne Monnier, the French partner of Sylvia Beach (who published Ulysses in 1922) included the retitled “From Work in Progress” in Le Navire D’Argent—a French-language little magazine.

You will also note that Joyce published his work in special editions and ephemeral publications like the Criterion Miscellany. The allowed Joyce to continue working on his “Work in Progress” while stoking interest in his work as well as sustaining his fragile finances.

This is one reason why The Modernist Versions Project at the University of Victoria is interested in working with Special Collections to preserve this rich heritage of literary history. Modernism was born in the magazines, and in order to understand the evolution of a great literary masterpiece, we must preserve the pieces that make up its complicated story.

If you are interested in reading more about modernism and little magazines, you can find these books in our library: